Talking to birds and space aliens

Do we talk parrot?  No, we rely on them to speak human.  Do we talk whale?  Why not? They are always singing to one another.  If we record dolphin talk and play it back to them underwater, they will stop to have a conversation.  When we can’t answer, they swim off thinking we are idiots.

We can’t communicate with other species on this planet.  That is why space aliens leave us alone.

I must boast here.  I speak bird.  It took a while but they managed to train me.  The garden is surrounded by tall cedars, home to nesting redwing blackbirds--otherwise known as the bird most likely to peck the back of your head.  We have a pact.  They nest and I garden, and we don’t interfere with each other.  Except, I will scare away prowling cats.  They give me a heads up call, and I know what to do.

I got home one day to find my hedge trimmer guy holding a garbage can lid, loppers and a long stick.  Hold that over my head, he said, giving me the lid.  He gave me the stick, wave this about and it helps if you yell.  I explained to the birds that no one was nesting where he was going to lop.  They let him do it as long as I stood next to him.

So I was very surprised when I went out one spring to garden and was greeted by a chorus of warning cheeps.  I looked for predators.  Nothing.  I went into the shed for some tools.  Silence.  I came out to screeches of terror.  I went inside, silence.  It’s only me, I told them, as I took the saw over to a fallen cedar branch.

A female red wing blackbird flew next to me.  She landed on a branch at eye level. Leaning as far towards me as she could get, she said, Cheep!  Cheep!  Cheep!

I explained, while she listened intently, I am only going to trim the broken branch.  I trimmed the branch.  Silence.  I started to walk to put saw back in the shed, and the birds went crazy calling to me.

I got a chair and sat down where they could see me not doing anything, hoping it would calm them.  My husband came outside to ask, what’s wrong with the birds?  And then I saw it--a fledgling crouched under the lilac shrub.  I’d walked past it many times.  It was a wonder I hadn’t trodden on it.

You see, birds have a sense of honor, of right and wrong.  No bird wanted to peck me on the back of the head, their usual method of communicating with humans who get in the way.  They hadn’t tried to mob me.  They’d sent a messenger to explain there was a baby bird on the ground near my feet.  If space aliens visit, they’ll want to talk to the birds.
Posted by Maggie Jagger at 9:20 PM 1 comment:

time for another sunset 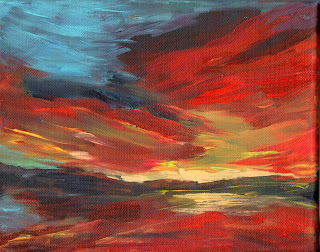 Posted by Maggie Jagger at 10:16 AM No comments:

Lizzie Tempest Ruins A Viscount is now a free ebook 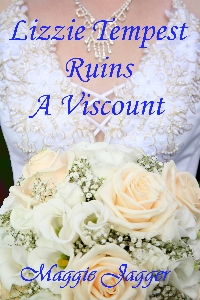 I hope it makes you laugh.

My mother didn't laugh. She told very seriously that Lizzie should never have married  him.  What can I say?  I had warned her not to read it.  Lizzie agrees with my mother for half the book at least.

Blame the author, everyone does!

If you enjoy it, I'd be thrilled if you review it.

If you are more on my mother's side, I am sorry, very sorry, and I promise Lizzie will never marry him again in my imagination.

Posted by Maggie Jagger at 7:52 PM No comments:

Have you ever laughed and wished you could stop laughing? I am not talking about a smiggle (cross between a smile and a giggle) I mean stomach twitching, air gasping, helpless convulsions of laughter. Spasms grip as an outburst of guffaws threatens to never end. Awful isn’t it?

That is what happened to me and it was all Helen Fielding’s fault!

Never. I repeat, NEVER, read anything she writes on a plane.

I got on the plane and took my seat a little teary-eyed, having left my aged parents in the old country, to go home to my new country in the Frozen North.

To distract myself I picked up my Bridget Jones book. Big mistake! The man in the seat beside me is probably scarred for life. Halfway across the Atlantic ocean I get to the scene where Bridget opens Mark Darcy’s bedroom door. If I’d been alone I’d have enjoyed my LOL but trapped in a plane I tried to stop myself. I tried to stop all the guffawing, gasping, spasms, and convulsions. I hid the book behind the vomit bag! I didn’t dare even look at the cover! The fit lasted for an embarrassingly long time.

Now I read boring books and try to solve the evil Sudoku.

Never read comedy on a plane!
Posted by Maggie Jagger at 11:25 PM No comments:

There are so far two books in my Felmont Bride series.  The first is Lizzie Tempest Ruins A Viscount.  Lord Felmont marries Lizzie much against his will because who would want to marry someone who hates them?  In this book we discover that the Felmont males were usually not faithful, which accounts for their distinctive features being on many descendants not bearing the Felmont name. Angel Anston is one, the Duke of Saint Sirin is another. I am sure more will be discovered and have books of their own.

When female Felmonts marry, their sons sometimes inherit their distinctive features and get to star in a book. Lord Rupert's Foolish Bride is second in the Felmont Brides series. Angel Anston shows up there to make trouble.  Felmonts tend to be unpredictable and fearless. If they think someone needs killing or kidnapping, they are going to do it.

My next book is third in the series. Dare I say when to look for it? Better not tempt fate!
Posted by Maggie Jagger at 10:58 AM No comments: